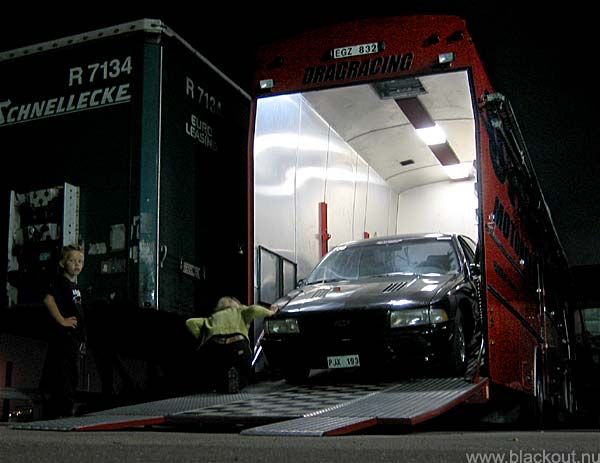 Midnight...
After three solid and busy months in The Best Damn Garage In Town - we WANT to go to a
dragstrip... NOW!!! The work after the engine bay fire in the Impala SS is just finished and Patrick
Wikström was kind enough to let us borrow his bus because I haven't had the time to get the car
through the yearly inspection to get it legal on the street. Thanks Patrick! We squeezed the
full size Impala into the bus with less than an inch on each side!
We went from Gothenburg around 1 a.m. and came to Mantorp 5 a.m. I drove the bus with Axel
who was trying to stay awake, Agneta drove our Dodge Grand Caravan and...Solifer T1 caravan.

The whole Mantorp pit for ourselves. Quiet too. 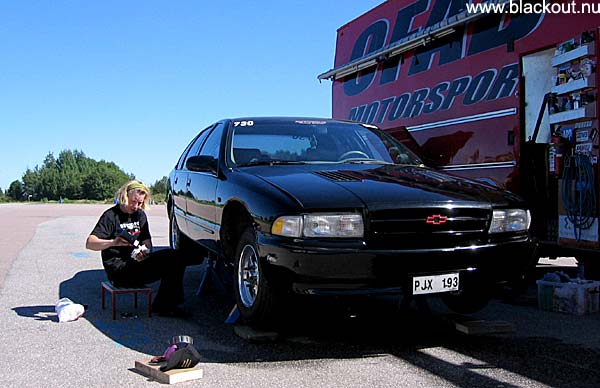 First job was to lower the body over the rear to get the hitch for the camper as low as possible, campers
like that. Having a Chassisworks Fab9 with adjustable shock mounts made this work easy, I mean it
was made for occasions like this. Meanwhile Agneta waxed the Blackout SS. 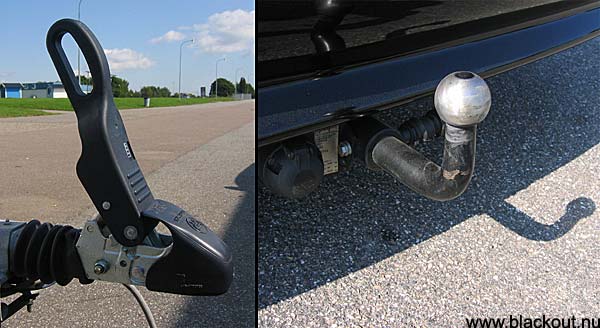 This new friction hitch assembly needs to work very dry, so not only away with old grease on your ball
(hehe) it must also be a clean metal surface, we had to grind off the black paint. Works perfectly though! 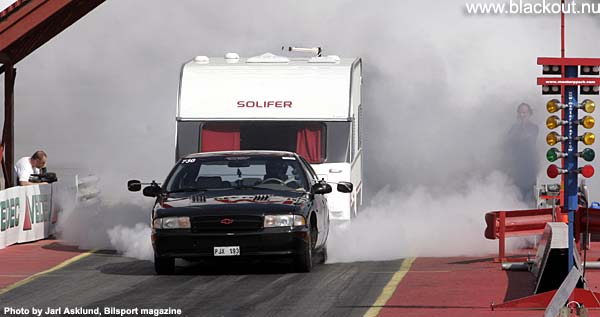 Why is Tony (to the right) covering his ears? I run with open headers for easier access to adjust
the rear end. Beefy sound, but I'd rather have the exhaust system on because then I can hear
the engine better. 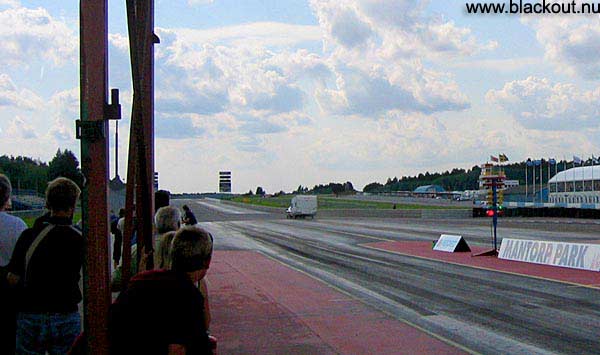 Shortest vacation yet! 16.29 @ 85.14 mph - 137 kmh. But I wanted an even shorter one!
Do you see that darker area down the track in the picture, where the Impala SS and the Solifer T1 just
enters? All the built up rubber and track bite was blasted away there a week before this, because
Shell and Ferrari F1 had some fuel testing days on the circuit and they refused to run on our
sticky surface. So there we had a lot of lost traction! Hey, what have I done to Ferrari, really!? 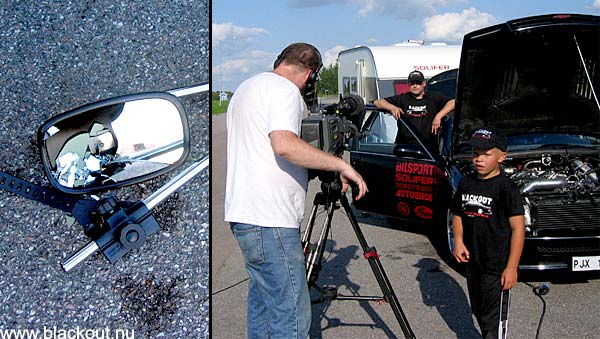 As I guessed, the caravan rear view mirror lasted to 150 meters then fell off and provided me 7 more
years with bad luck. Or is it the other way around when you already are experiencing a 7 year spell???
Pelle's work with four cameras will be aired this autumn on TV-channel Kanal 5 in a new series of
programs called Autobahn. I hope to get hold of some footage to show here at my site as well. 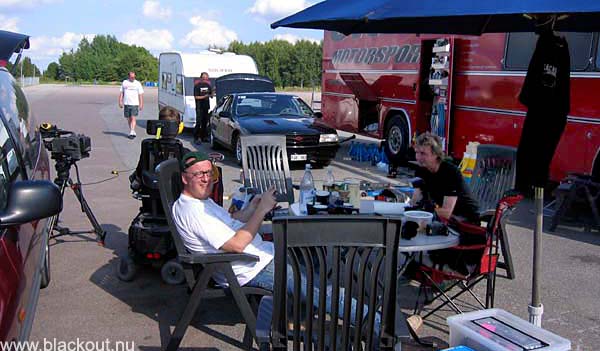 Videographer Pelle Bendz and photographer Jarl Asklund discussing nice angles to get the camper.
A first for them both. Jarl covered this for Bilsport Magazine but his pictures are already spread with
Solifer's Press Release and in other magazines and...here on my site. Jarl lives in Mantorp
and brought fantastic plums from his garden to our pit place! Thanks Jarl! 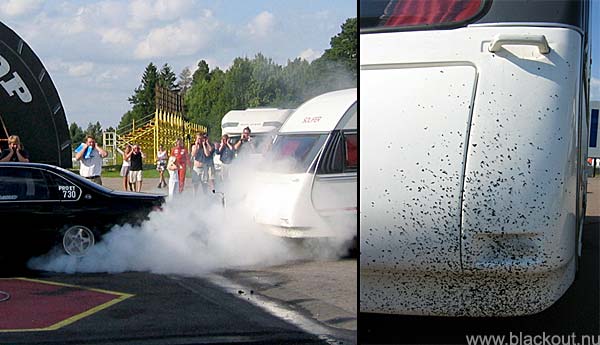 Where is all the rubber going in a burnout? I know. 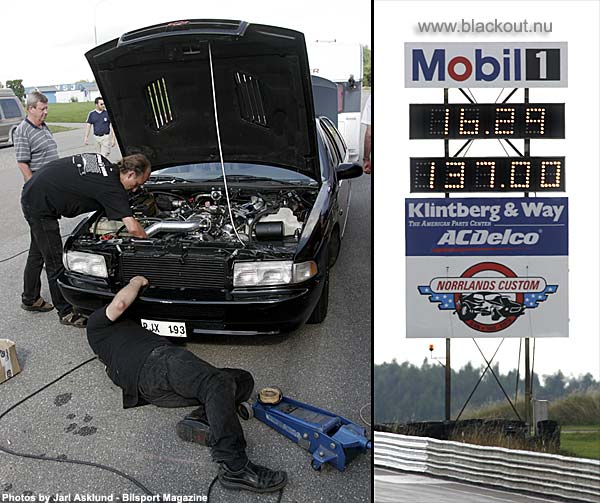 It was a constant panic to get the Blackout SS to run well. The new record was really a Hole-In-One! 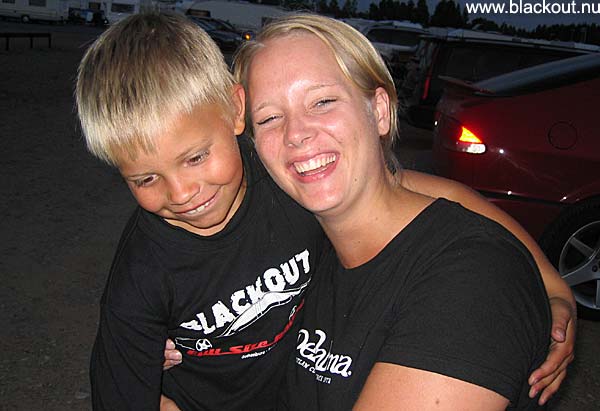 Top Fuel-lady Susanne Callin was game for Axel. Now she drove the De Palma 2-seater dragster all
weekend and became an expert on letting the throttle off for the area without trackbite and
then full throttle again. WAAAAAAAAA.a.a.a.a.a.a.a.a.a.a.a.a.a.AAAAAAA!!!! 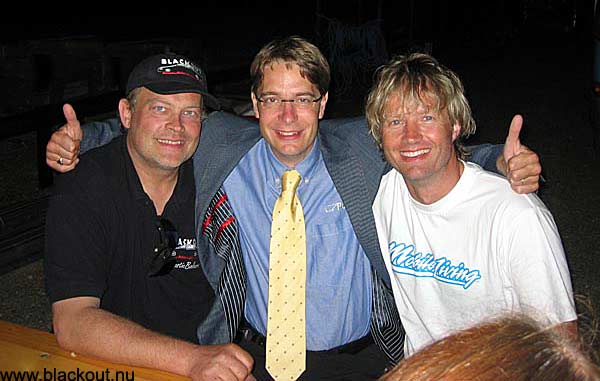 A happy Managing Director at Solifer, Patrik Ankar, supported by two Umebor! Jan Pehrsson to the
right is not only a keen dragracer with his Vipers, he is also working to market Solifer in his agency.
It was Jan that called me up in March and asked me if I could do the record runs, again.

Then back to "normal". We wanted to drive home at noon but a little guy had all lamps on for a night
inside the OFAB Motorsport bus. We tried for hours. Charging the batteries and then jumpstarts. But
after 6 hours I had to call my sponsors Falck to start it. What happens then? Diesel just floods from
underneath, a fuelline is broken!. What are the odds of that happening? We were the last ones from
Mantorp at 8 PM. Even the gates were closed! You name it. 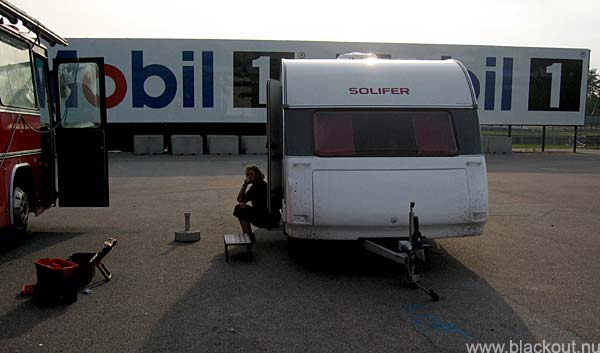 How much can she take?