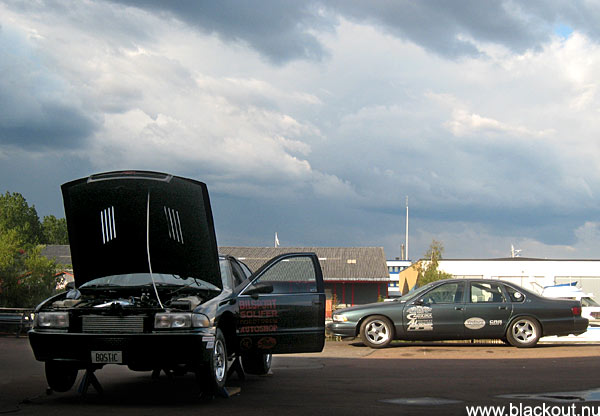 The day before the race at Säve it was timing time with connected blower. Mr Al Holt made a quick stop
and we sorted it all out very quickly. And Bruce Springsteen was heard in the sky. His concert was at
Ullevi sports arena across the river. I guess it was the first time that Karl Ellwein's Heavy Eliminator
SS heard The Boss live? And the very first time that Bruce heard the Jeezus engine? =) 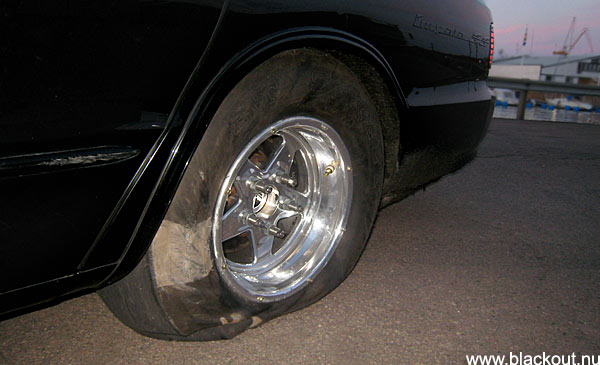 And now what? Oh, I almost forgot that I had the Blackout SS which always has to make everything
difficult. Like a flat slick at the end of the day just hours before planned test race at local Säve! 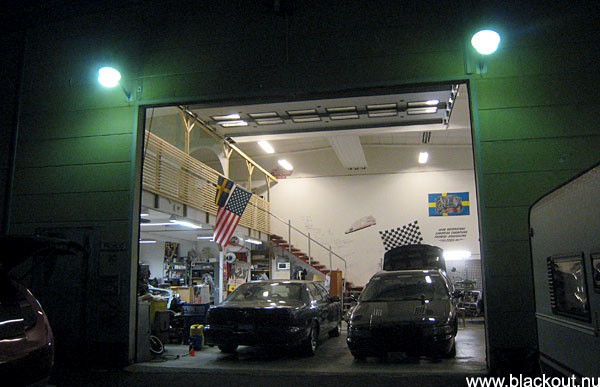 Maybe I should go with Karl's Impala instead??? At dark all Impala SS turn black! They came only in
three colors: Black, Dark Grey Green Metallic (DGGM) - like Karl's - and Dark Cherry Metallic (DCM)
like friend Ola Åbergh's SS who even bought his car at late evening in Orlando, FL and
was surprised in the morning: -Oh, it's red?!
Well, now it was off with the flat slick and pump it up again. Decision about racing or not will be taken
next morning depending on the looks of the slick. I almost lost my interest anyway at this moment... 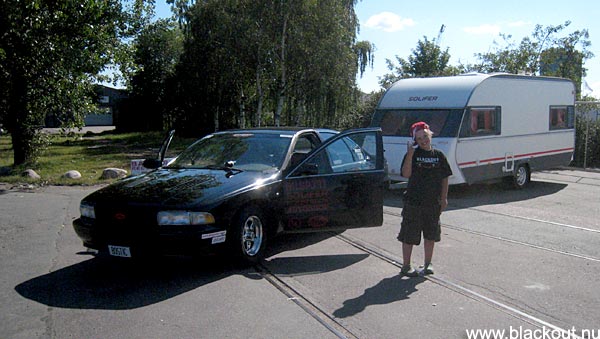 Slick looked good in the morning. But we had some logistics problems when not having any driver for
the Dodge van with all the stuff. Axel and I solved that by loading the stuff into the Solifer T1 caravan,
put it on the trailer hitch and off we went...but the cooling water was hotter than usual on this hot day! 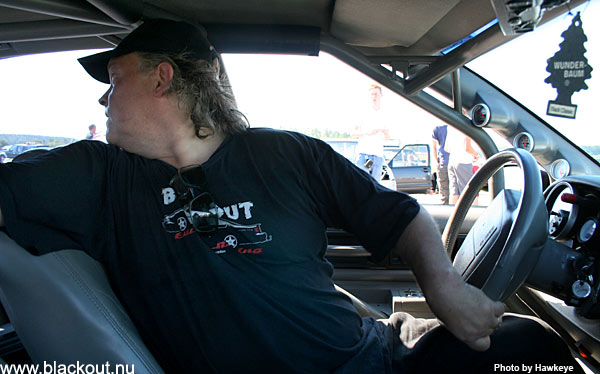 Friend and photojournalist Rickard "Hawkeye" Waltgård just jumped into the Impala SS when we arrived
in the pit, I guess to take this picture when backing up the caravan. Too many are watching to allow
a mistake. You must be a real man and back it up on the first attempt! Well, no one has ever
said that but that's surely the feeling you have. Especially when you've managed tandem trailer once! 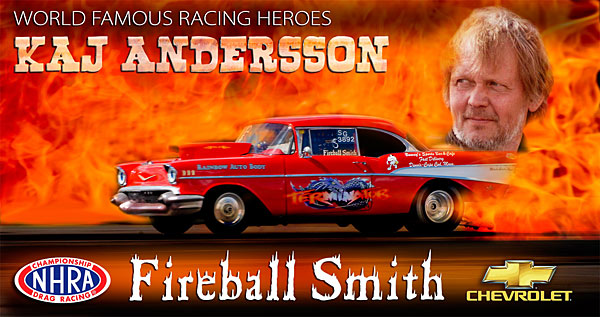 Him! As in the brain, eyes, camera and Photoshop of colleague Chris Condor.

Condor was also at Säve! He followed my routines when making the street Impala into the race Impala:
1. Jack it up.
2. Change wheels.
3. Connect the blower belt (left picture)
4. Change from 98 Octane fuel to VP 109 Octane race fuel (picture to the right).
5. Connect the Anti Roll Bar, when car on ground.

Warming up the oils. Axel was the only mechanic left in our team, since Agneta was at home already
preparing and packing for our Norrland-or-Bust-Tour starting in two days. 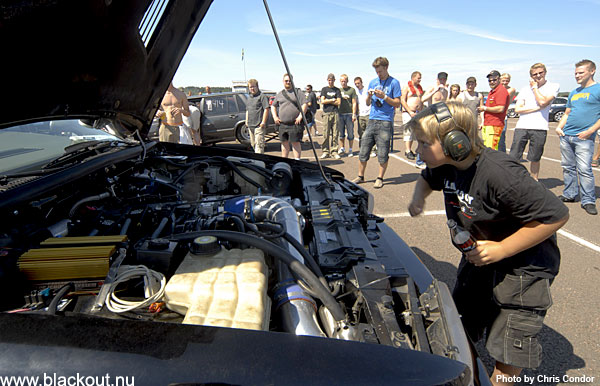 Condor caught Crewchief Axel in action. A wonderful picture for the whole family to keep for the future.

Mårten in yellow was an official. Always helpful VW-Micke helped organizing a jump start of Blackout
since the battery was totally drained out by the use of the car's water pumps and fans without the
engine running. It was so hot that I had to do it, but then the 105 Ah battery was suddenly empty.
Then I had to keep the engine running when started again, getting hotter and hotter! A negative spiral. 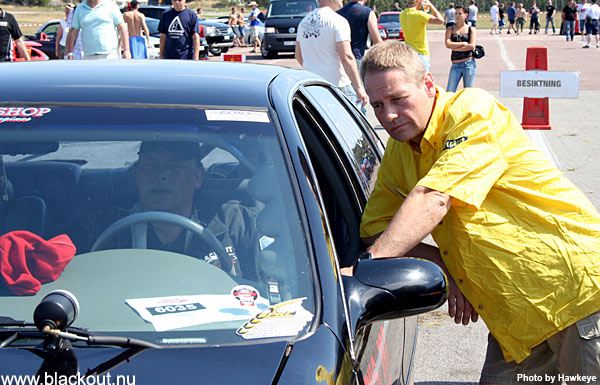 Lars-Inge worked in inspection and had to kick me into the Extreme Street class from my normal
V8-class. That's because the change of rules of Bilsport - A Day At The Dragstrip. 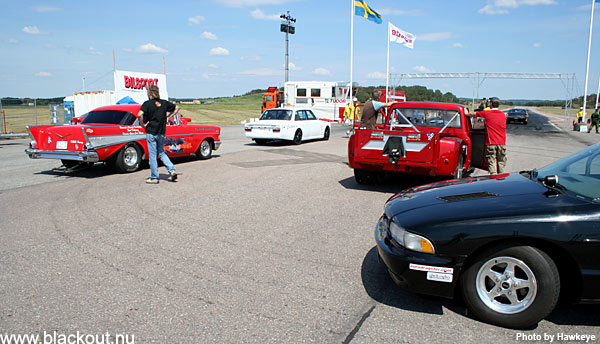 Since I have changed the rear end I had to run with the big boys. Who cares, I'm just here testing. 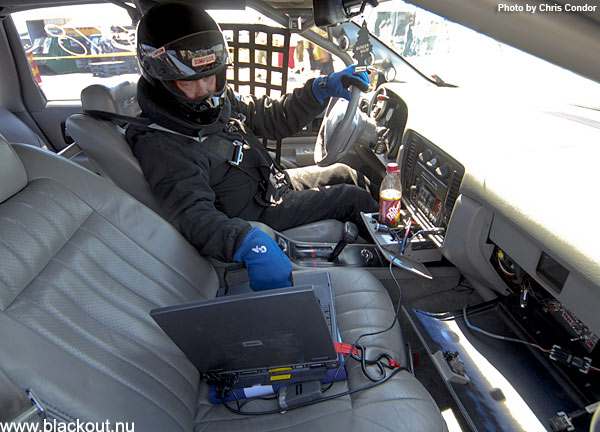 To log the behavior of the engine is an important part of the testing so it can be evaluated later.
Lap top is safely strapped to the seat. I activate the recording when reaching the first stage lamp. 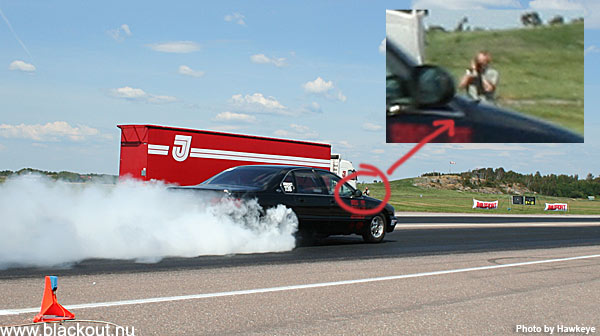 Since I'm running with the Extreme Street I might as well do a burnout passing the starting line! But
take a look at Condor over there! How is he holding his long lens camera? The Human Tripod in action!

This is Condor's result anyway: 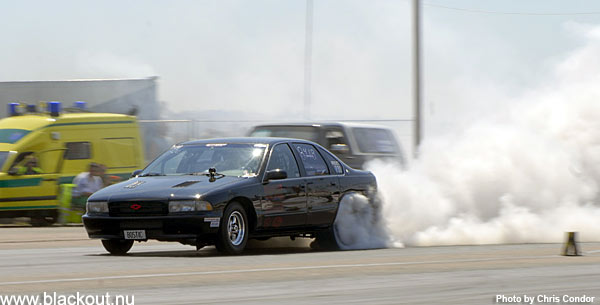 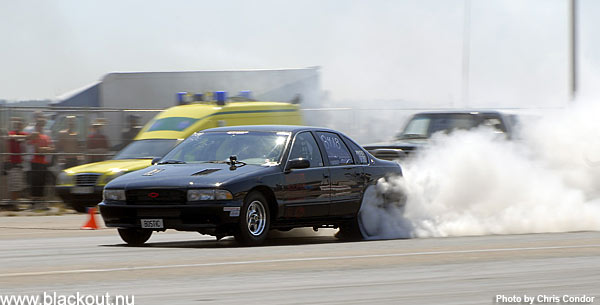 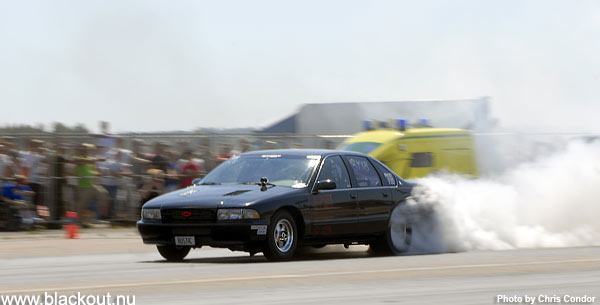 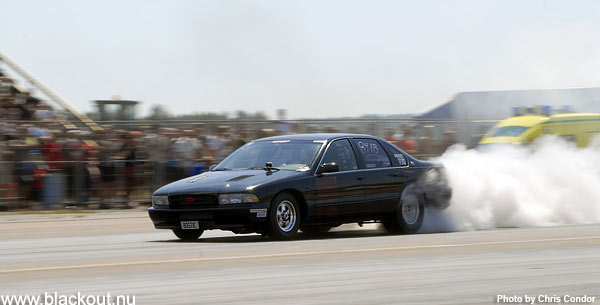 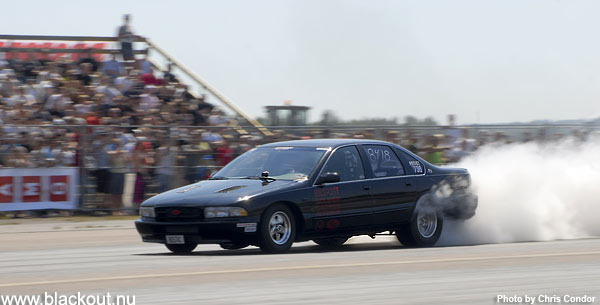 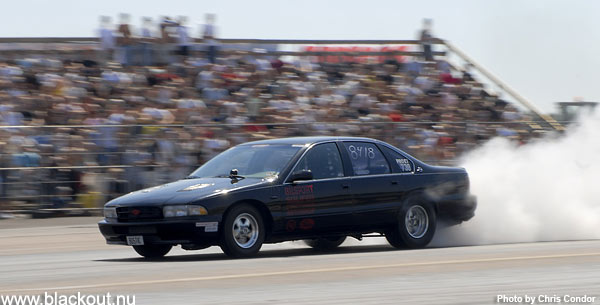 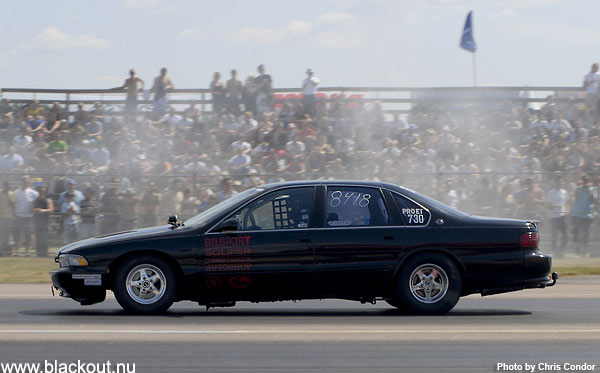 How about that series of pictures? A burnout is slow in speed and still Condor made it look like very fast!
Of course he used rather long time but that is also more difficult using a long lens.
Condor facts: Nikon D200 + Nikon zoom lens. In this sequence he used from 122 mm to 75 mm.
100 ISO and f/16. Shutter speed was 1/90 s. which was a "safe" choice since he thought he had only
one chance at it, which was a good guess. When he gets many chances, like on a Speedway race, he
typically plays with 1/40 to 1/20 s. to get that right motion blur. Size is 300 dpi 3872 x 2592 pix.

Well, the test run was short. The transmission seemed like it never would shift to 2nd and that rattling
feeling when engine is going lean because the injectors can't deliver and are out of their window is not
a happy moment. Shall I abort or will it damn shift soon? You have a second to decide. Then I saw in
my rear view mirrors a fluid or something from my car and then you don't think anymore, just let go off
the accelerator and steer towards the side of the strip and roll to the finish line out there. Glad it was
only water, with no anti freeze!! I let off before the 1/8 Mile and rolled the rest to get an 11.8 timeslip.
Oh, yes, I turned ignition off when stopped and lost the log too... 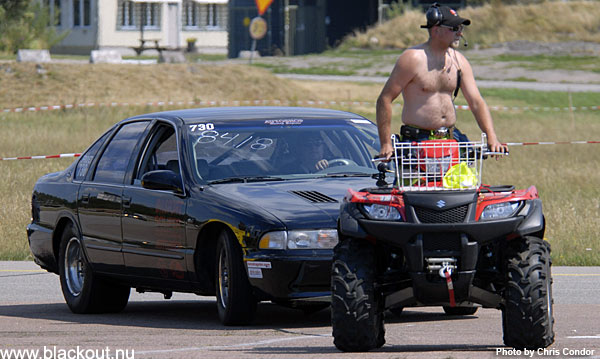 Engine was going too hot. The 18 psi coolant cap couldn't hold the water and was spewing it out.
When towed I was only thinking: "I hope it's not a blown head gasket...but if so, better here than in
Piteå some 1300 Km away (800 Miles). I have two days before going to Piteå to fix it"

Crewchief said "Please, no more testing, let's go home" and he was right. 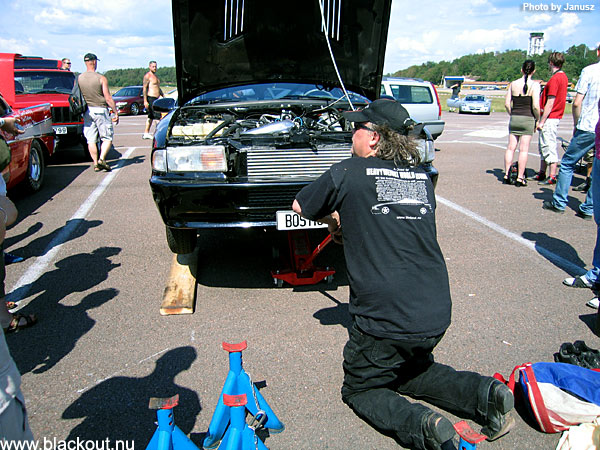 Back at it again. Reverse order to get it in street trim. Who needs a gym?

The hottest day in a long time and I guess Möllers sold out their 25 SKR soft drinks? Water supply was
well visited too! Per Moe was also at the gym with a new converter in his 1996 Impala SS but he wasn't
too happy about it. I don't remember the times but it was slower than before. 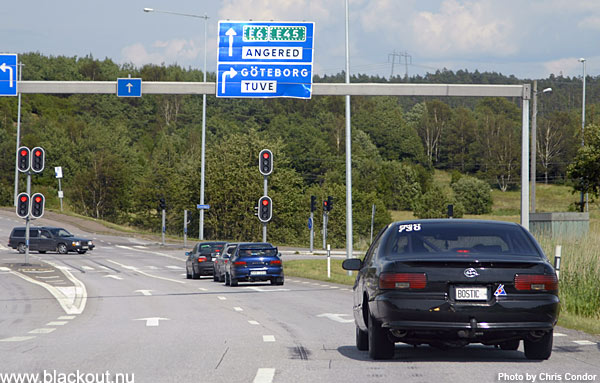 It was no problem with the head gaskets so I could drive back to TBDGIT.

However Condor offered to take the caravan for us. But why is the SS going 20° C hotter this year??? 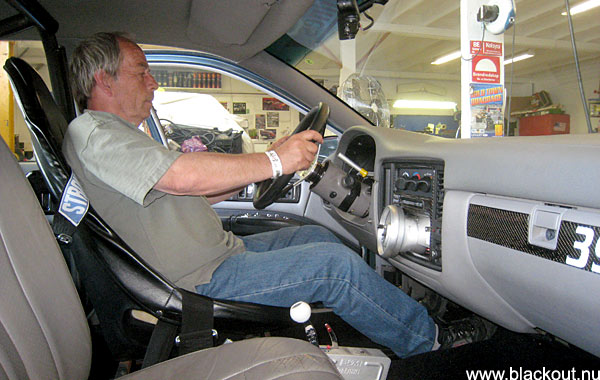 Condor liked to sit in Karl's SS. "It feels right" he said, I think he liked the close-to-the-steering-wheel
NASCAR-style? Condor himself has much racing in him, coming from Go-cart together with late
Ronnie Peterson and through single seat racers Formel Vee and Super Vee around Europe and to
Speedway with 500 cc bikes.

Thank you for the excellect photos Chris Condor, Hawkeye and Janusz!

The electric Meziere water pump didn't work which explained why everything was going so hot.
I also have a Stewart in-line 55 gpm water pump which did all the work. I rewired
the Meziere and it worked again! 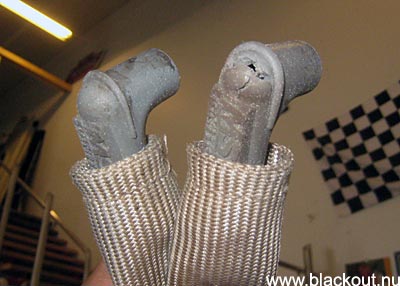 I found another problem while making the valve adjustment, I found a
broken spark plug connector for cylinder # 5. This is what happens if
you use a tool to press the connector to its "click" on the spark plug.
# 5 is extremely close to the header pipe so it may have had
some short circuit disturbance going on?

And Blackout was now in one piece, ready to be shipped to
Norrland on Monday!