JESUS 396 - CHANGING TO A BIGGER CRANK 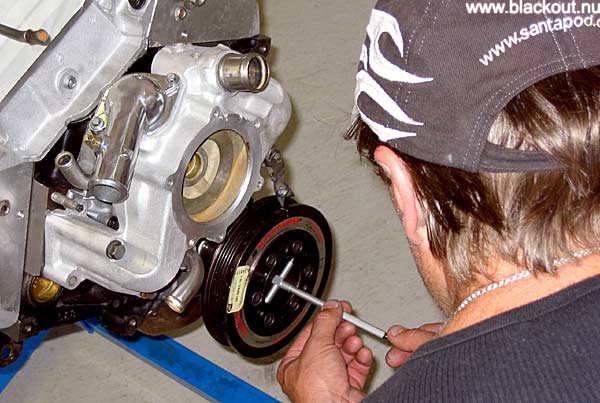 Top Fuel Tore has begun to measure with his micrometer to make a crank support. It is a larger inside
diameter in the new hub, Tore will manufacture a new support that will help the axle in the far end
in the front of the blower belt pulley. To avoid having the new crank breaking too... 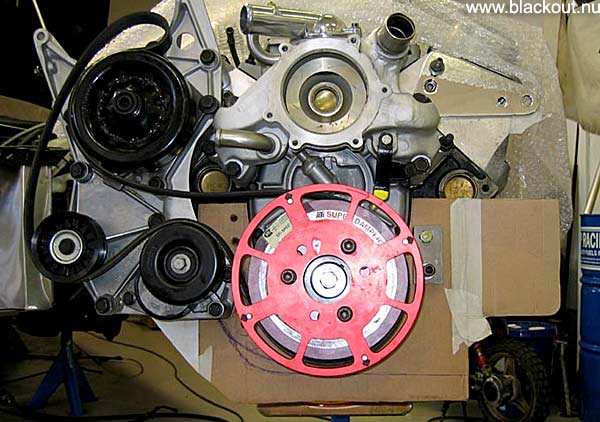 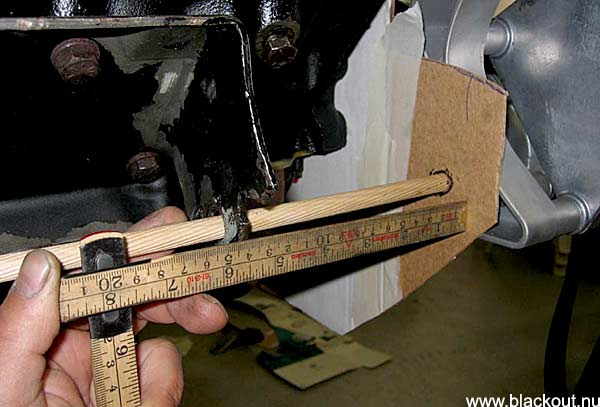 To find the in-car location of the new tailor-made support - before putting the engine into the bay -
I thought it was a good idea to begin with the engine-mounts.... 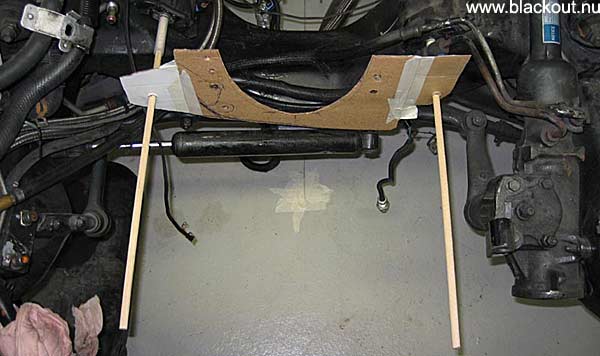 ...and then measure it up in place on a pair of wooden sticks. Just roughly. 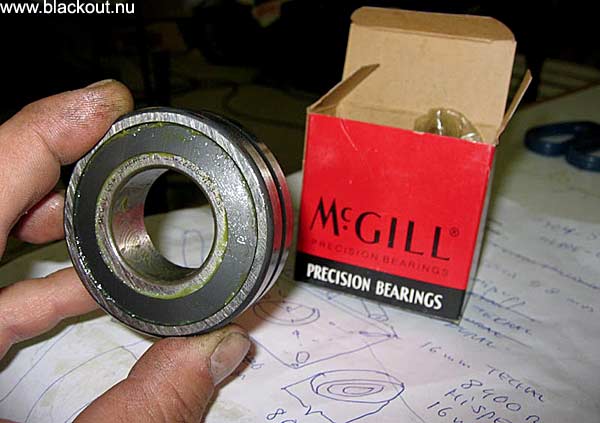 The bearing may be a Swedish invention in courtesy of SKF - Svenska Kullager Fabriken, but this
American McGill is the King! It's an extra exclusive spherical roll bearing, made by single rolls - not twins.
It will help if our support doesn't line up perfectly on the hundreds... 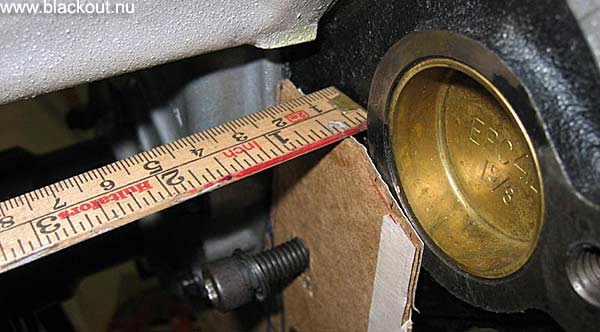 Only 8 mm of space behind dural engine mounting plate and block on driver's side. 6 mm Dural engine
plates will be closest on block on both sides. But here I'll need to grind away the Dural to get 8 + 6 mm
of space for the bolt which will hold one of the tubes.

Tubes will also be made of Mechal but a 32 mm chrome moly tube is a dummy here!

It will be very tight everywhere!

The idler wheel is here in a no-tension position. More space will happen. 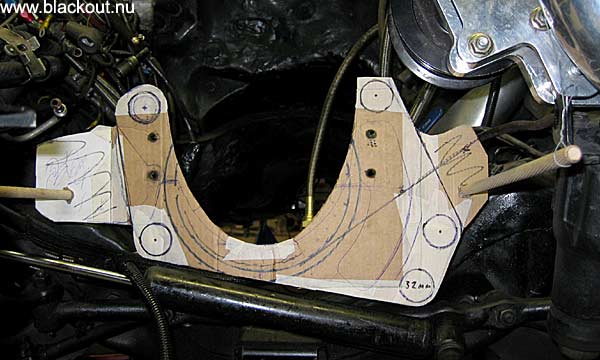 Does it still fit in the SS? I made two alternative places to choose for the tube on lower driver's side.
Either one can be used depending on crank trigger pick up location. 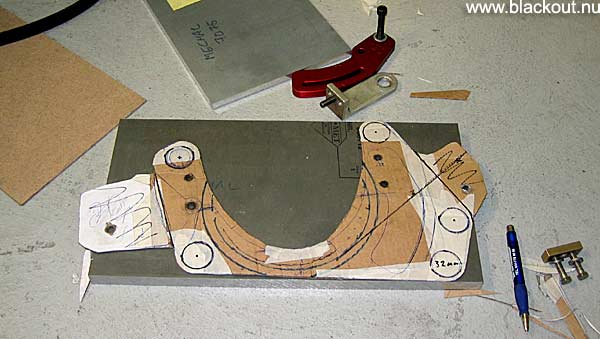 Hot Rod Evolution = Cardboard-Birch board-Mechal 7075. The Mechal aluminium is the best I can use.
It is what the aircraft industry uses when they can't use steel. I already had my blower bracket made
in it. Mechal doesn't need helicoil threads. 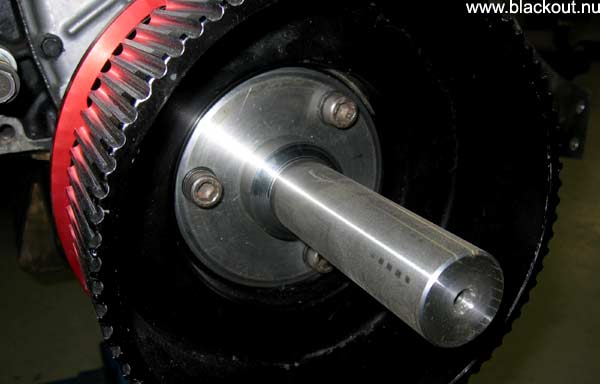 Support axle on its way. 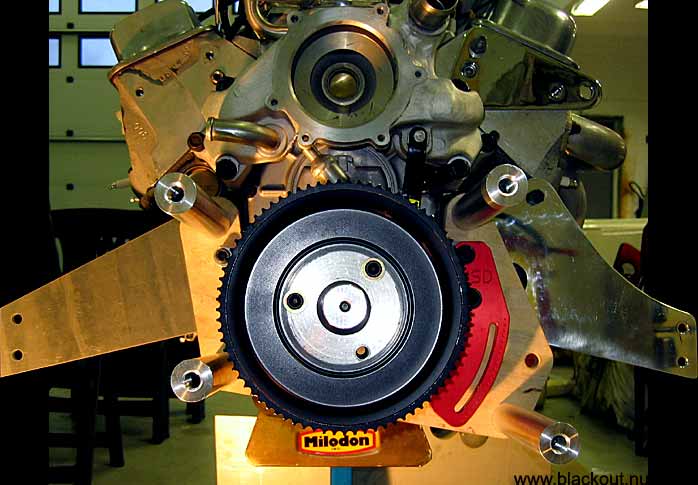 Yes. 20 mm birch board which Dennis "Waterman" Palm did for a test smacked right on and it looks like
it can work after all. Kenneth Feldthusen has made 14 mm threads into the Mechal tubes and also drilled
them through to get even better strength. A bonus is that I managed to squeeze in an engine mounting
plate also on the passenger side. 6 mm Dural as the polished one on driver's side. 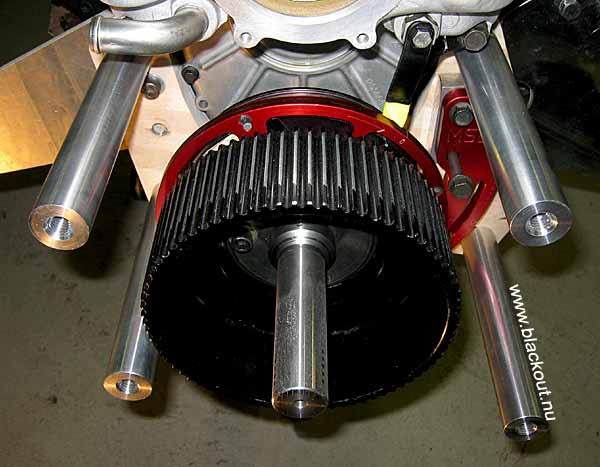 Dennis will water jet cut the plates in Mechal as soon as I have measured the birch plate and find it OK. 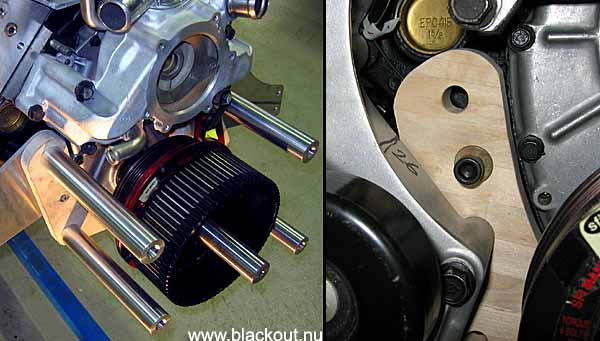 To make this happen it is necessary to grind off 26 mm from the big Chevrolet pulley bracket. 26 mm is
what the new plates are building - engine plate 6 mm, support plate 20 mm. 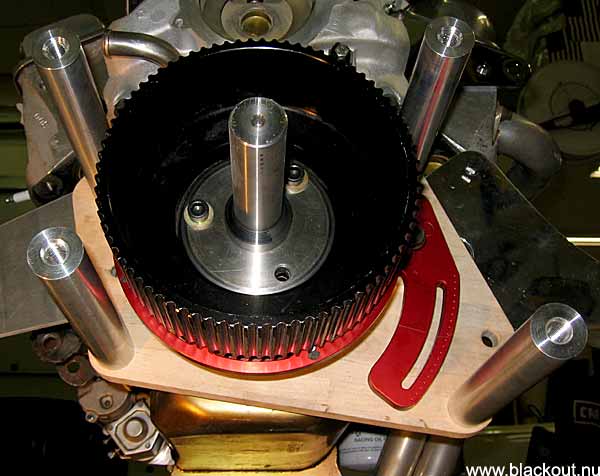 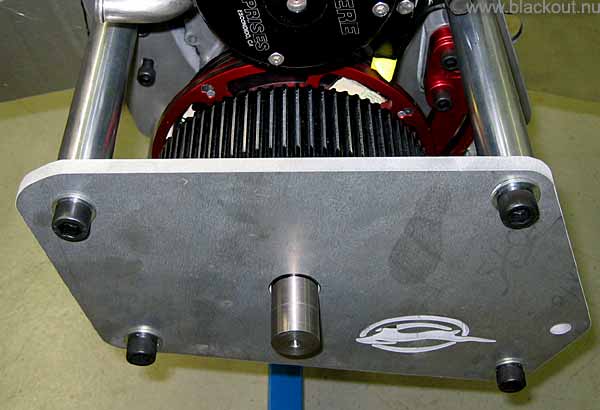 At last! Thanks Dennis "Waterman" Palm at Mekpart in Gothenburg! Worko Splendido! 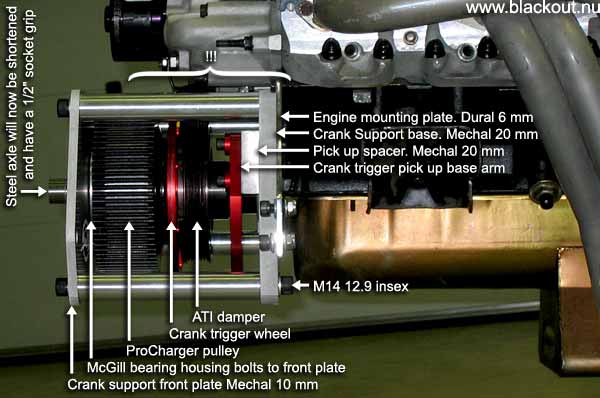 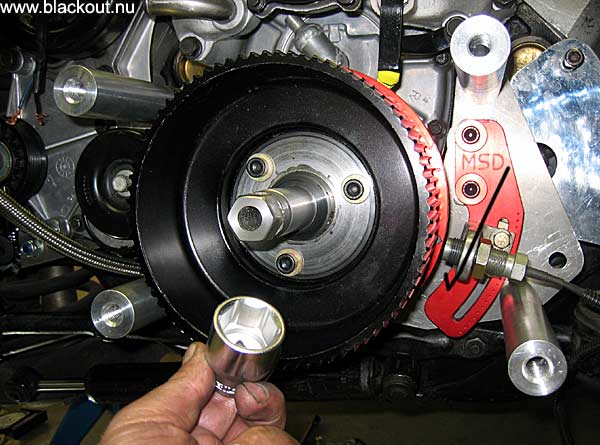 Kenneth Feldthusen solved the ability to turn the crank by grinding the support axle for a 26 mm socket.
Engine dressing is here coming together piece by piece. 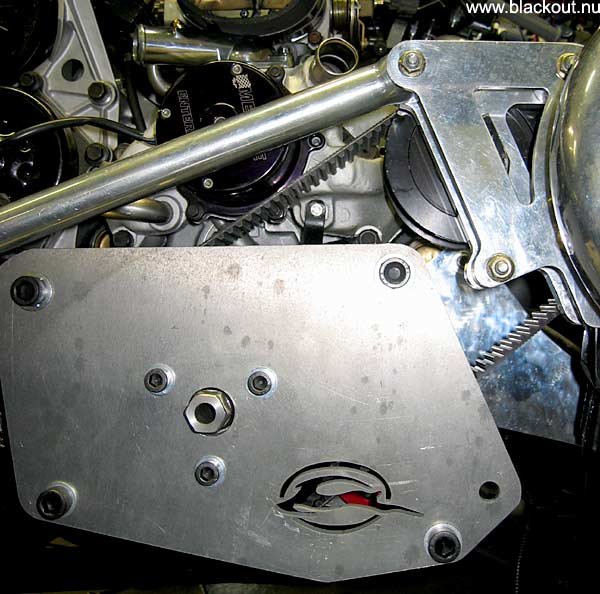 I wish I had the time to get it polished. Later. The triangular 10 mm 12.9 insex bolts around the
supportaxle holds the McGill bearing housing. 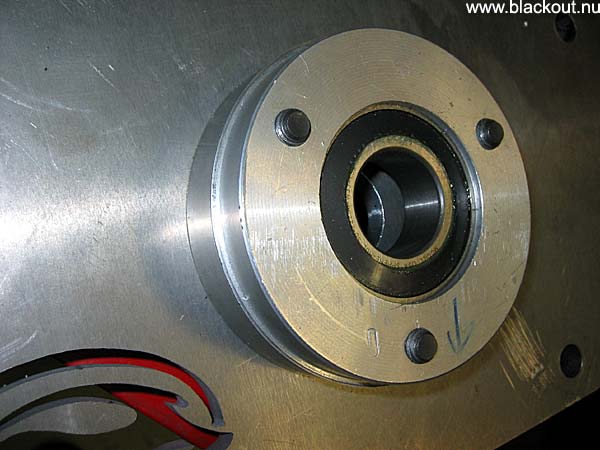 This is the bearing housing on the back side made by Kenneth Feldthusen in two pieces. 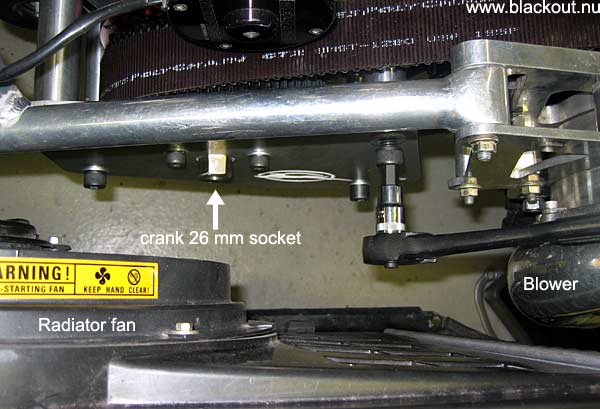 To keep the engine dead still in the car you'll need a pair of engine mounts like these. I've just made
these new brackets in 5 mm Mechal aluminium (water cut by Dennis) that will make it possible to tip the
engine backwards if in need to get the transmission out of the car quickly (leaving the engine in its
place). The new trans brake can force that to happen!
The Driver's side bracket is of a lower and tighter design because of the clearance to the steering. 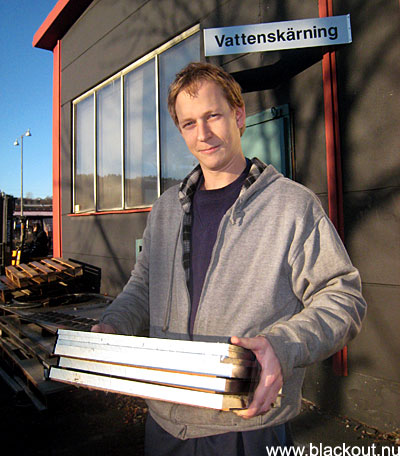 Dennis Palm got the very expensive aluminium Mechal 7079 today.
As the sign says, it's time for some water cutting again! Since engine
builder and friend Karl Ellwein of the growing business Ellwein Engines
in Maryland USA couldn't find any engineer over there willing to
construct a crank support for Generation II LT1, he then asked me to
make a couple of kits out of my design, which of course I've already
had in good use for three years with proven performance. 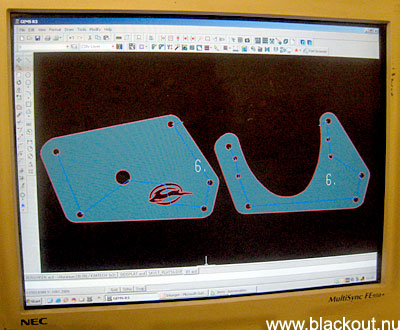 Dennis clicked his computer to get the designs active again. Also
more friends are involved, Kenneth Feldthusen and Top Fuel Thore
will again have to do a great deal of work in their machines before
the kits are ready to ship. Steel axels, aluminium tubes, threads,
bearing hubs... Kent Edin in Umeå will of course have the No 2 kit. 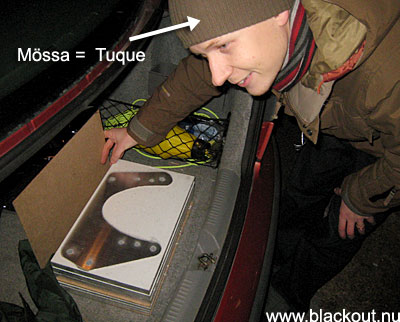 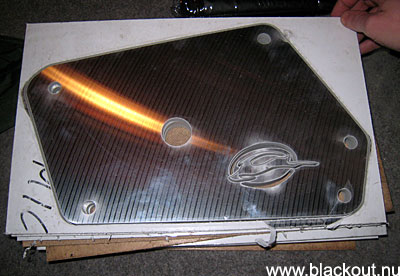 Ahh! look at this metal art! And the lucky buyers can look forward to
having that little Impala antelope as a toy! It's loose after the cut. 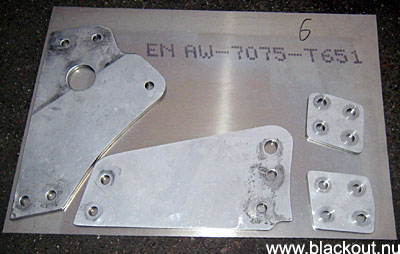 Next mission for Dennis, copies of all my engine plates in 6 mm (1/4")
7075 Mechal. This is only for Kent at this stage. These together
with the steel ones (that will be welded to the frame) will make his
Gen II LT1 engine sit solid when the torque applies.
Of course this kit will also be possible to order separately, but take
note that you must delete the AC pump to be able to use this. 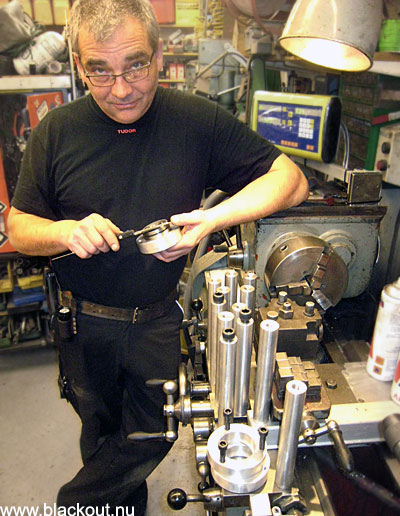 Kenneth Feldthusen is finished with his part in our fabrication of
Gen II LT1 Crank Support kits for Karl Ellwein of Ellwein Engines
and Kent Edin who will have the first kit. Kenneth also revealed
that Team Northrace has ordered a new Brad Anderson engine! 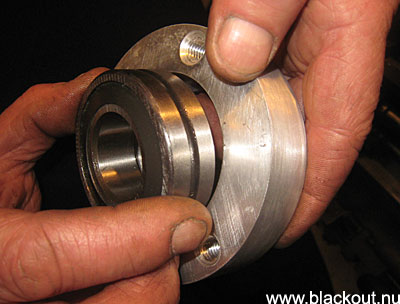 Kenneth has made the bearing housings with an interference fit for
the exclusive McGill spearical roll bearing. Just some warming of
the housing is necessary to mount the bearing. Now we only wait
on the support steel axles from the hands of Top Fuel Thore. 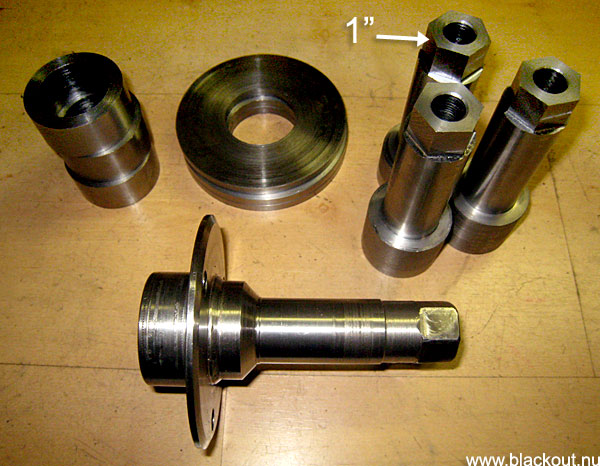 Support axles in steel on its way for the Crank Support kits. Top Fuel Thore is fabricating three axles
following the one that he and Kenneth Feldthusen made earlier for me (lower). They're made of three
separate parts which are welded together before the last finish is done in the lathe.
Socket size will be 1". 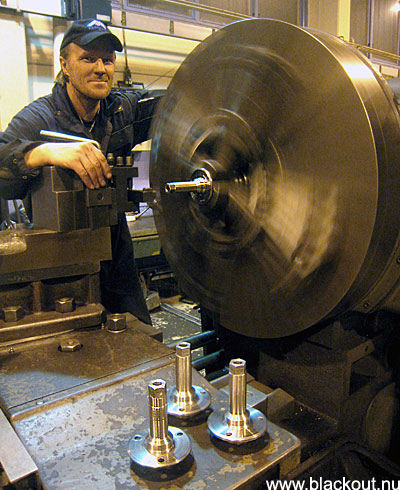 Big Size Order! Top Fuel Thore needed only to use the second
largest lathe at his firm which usually works for the heavy ship
industry. 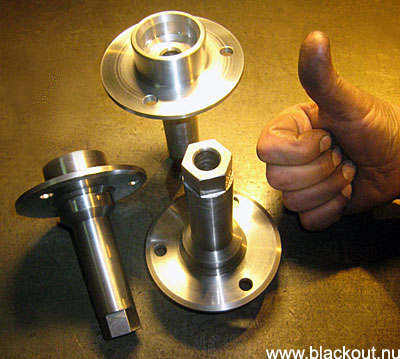 Fine support axles done. Already on their way to Maryland and
Umeå. The Crank Support kits are delivered. Thank you all
and good luck! 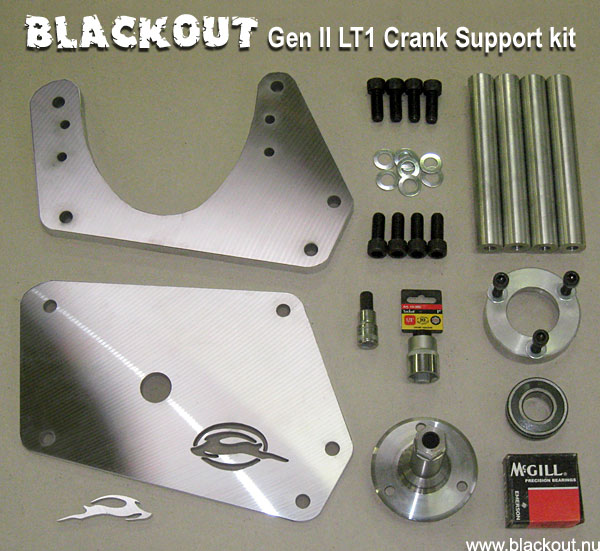