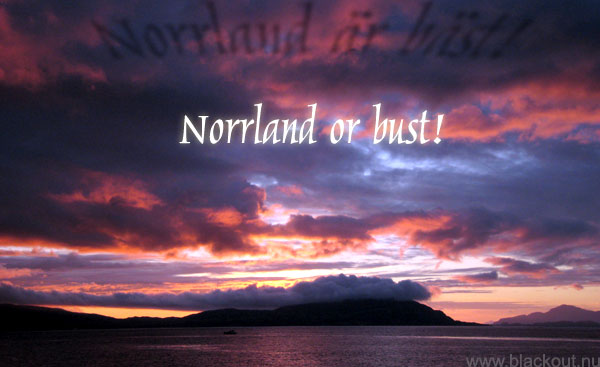 Well...we plan to do something different this year. Going North to the Midnight Sun!
That's because our friend Kent Edin in Umeå will enter the tracks in his >Gentle Giant Impala SS
and since his target is Blackout SS we think it's a good idea to back him up with some sparring!
And that means at the racetracks in Piteå and Skellefteå, two July weekends in a row. 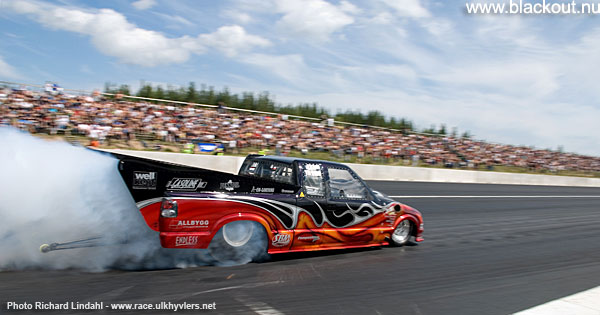 
Bonus:
Karl Ellwein of Ellwein Engines in Maryland, US of A will ship one of his Impalas to Gothenburg (!!!)
this spring for me to take care of in TBDGIT and then ship together with Blackout SS to our Norrland
Base in Umeå, in Kent's new garage! This means that we will have three SS's in Umeå. Karl is the one

that has built Kent's engine "King of Spades" and is also looking forward to race Kent and me in
Piteå and Skellefteå. And in between we'll take Karl above the Arctic Circle and further
so we can give him - and all of us - a Norrland Summer Experience! 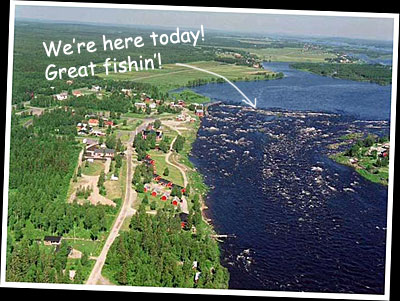 Anyway, Karl will go home after this first session and in September he will be back and we'll go for
Santa Pod and some Pro ET racing, hopefully also with Kent?
How often does this happen, that an American sends over his Sportsman to race us in Europe??

We will also look for the Bilsport Magazine events when their calender is set.
How 'bout that?

Kent vs. Karl vs. Bostic. Three ordinary boys with the same specific strange interest that brings them
together whatever the distances and whatever happens. They can prove that bumble bees can fly!
Can this really be allowed?


A lot of nice pictures from the races at Skellefteå and Piteå here:
race.ulkhyvlers.net 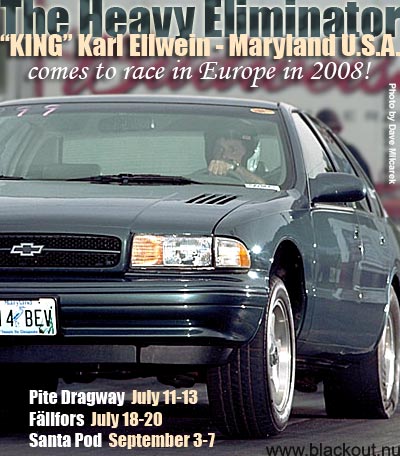 
May 30 - Sponsor stickers on and car at the docks at Port of New york!
In Sweden most of us already know of Autoshop in Orlando. We'll soon know more about the other
racing companies that Karl's got as sponsors on his 1995 Impala SS. On the back door Car Craft and
that cat company Vindouro! Karl has a good connection at Car Craft Magazine and since I have Bilsport
Magazine on Blackout SS I guess Karl wanted to meet that... 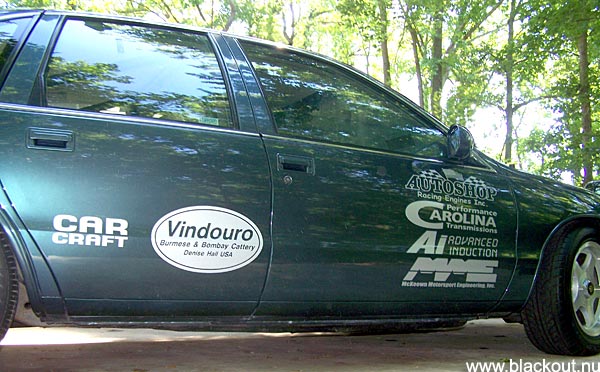 Karl's now trailered his "Heavy Eliminator" Impala SS from his home in St Leonard, Maryland to Port of
New York in Newark, New Jersey. There he got the "export" stamp on the title and the bill of lading.
Then he said hello to his dear car and drove home again. Next time he'll see the car should be at
Vallmogatan in Umeå on July 9th. If everything works out as planned?
We now also have our good friend Sören "Fixarn" Fjellstedt from ccv.se along in this project and in
charge of things that he is an expert on: import, export, paper work, paper work, paper work...
Thanks Sören!

May 18 - Tobbe Ekström, Vaasa, Finland, joins the adventure:
"We don't have too much to look at in Vaasa, but we got something...depening on the weather.
There is a restaurant in our archepelago, about a half hour trip by boat where they serve salmon
soup that is so good that it can make any supreme chef to look for another work.
I hope Karl likes fish...then this will be perfect!
/Tobbe Ekström
PS. I'll get Karl from the airport in our '70 Chevelle". 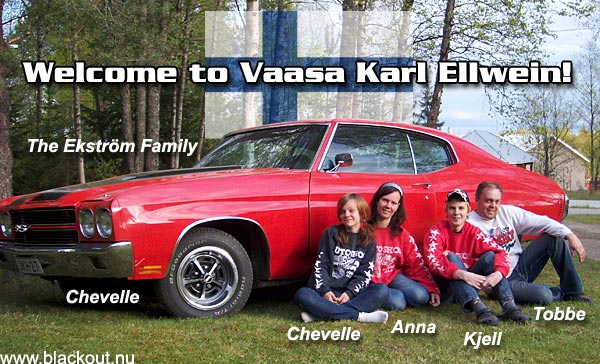 What a wonderful looking family! I guess Birgitta at Autoshop in Orlando also loves this picture! Yes,
their daughters' name is also Chevelle! Thank you for taking care of Karl from Maryland on his short visit!


May 15 - Just in from Karl:
"I want to spend 2 days sight-seeing while on the trip from USA to UMEA. The plan:
Fly into Helsinki Finland (arrive 10:40am Tuesday the 8th). Visit Helsinki all day and night.
Fly out of Helsinki on FinnConn air Wednesday and arrive in Vaasa Finland at 8:30am Wednesday.
Lunch and walk around Vaasa and wait for canoe or row-boat to UMEA 14:30 depart Vaasa
and 17:30 arrive UMEA Wednesday the 9th. Then on July 22nd fly home, Umea to Stockholm
to Frankfurt to Washington. Sound like a fun trip to Umea through Finland?
- Karl Ellwein" 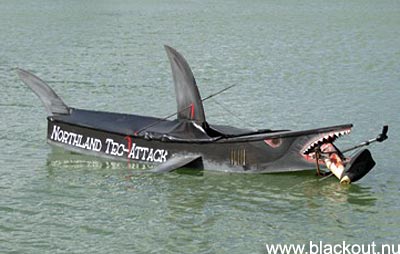 Karl got a message from his broker that the shipping company did
not drive his Impala SS aboard the Atlantic Companion as promised!!
Welcome to the shipping business! Instead they seem to have
loaded it on Atlantic Concert, which is a week behind in schedule.
Let's hope so. That means it should arrive in Gothenburg on June 29.
No more surprises please.
http://www.shiptrack/shipposition.AtlanticConcert 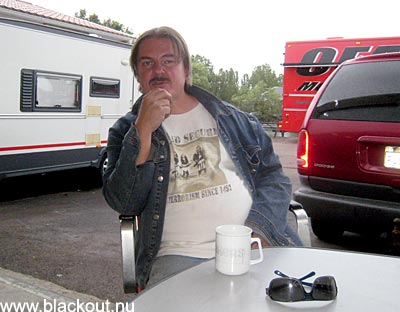 Sören "Fixarn" Fjellstedt. The Thinker. "Hm...this is what we'll do..."
He's the guy that always fixes everything bureaucratic that you won't
touch yourself. He's the expert, talented and he likes it too! When
Karl decided to ship his SS to Sweden, Sören was the first one to
call, and I asked him if he can take care of all the papers and
customs and even make Karl's Maryland-plated SS streetlegal in
Sweden? "Yes, of course, I'll be delighted". Without Sören this hadn't
worked. He's even fixing the truck transport for our Impalas to Umeå
and back to Gothenburg! Sörens place is CCV

Update: The ship with Karl's SS arrives now on Sunday to Port of
Gothenburg. On Monday Sören and I will drive it to our garage.
Exactly a week later the truck arrives to pick up our cars for
transport to Umeå and Kent Edin Gentle Giant HQ. 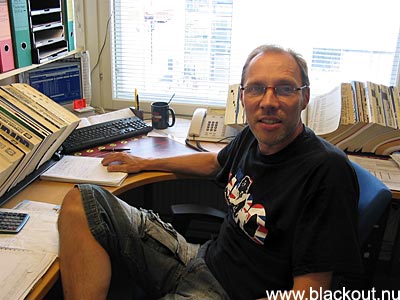 Welcome to Finland and Helsinki Karl Ellwein, says Eero Pirttinen!
Eero is an old friend of mine and was racing his Challenger when
I had the Camaro back in the 80's. He was living in Vaasa then.
Eero also raced with us at Santa Pod at the International Street
Finals & Doorslammer Nationals.
Check out our common memories: >GALLERIES_WHIPLASH 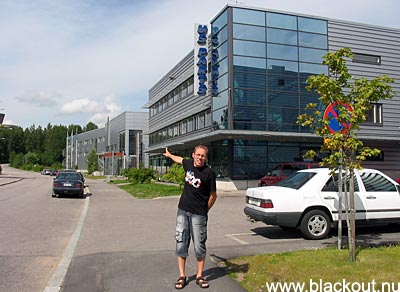 "I'm working here at US Parts" I guess Eero and Karl will have a lot
to talk about when doing Helsinki with Koff beer in hand, visiting
gear head hot spots and going to Zetor restaurant and more.
Again, wish I could be there with you. Have fun, and thanks Eero
for taking care of Karl. Maybe you should hide the Koskenkorva,
Karl must catch the flight to Vaasa next day. In Vaasa he will
be taken care of Tobbe Ekström. 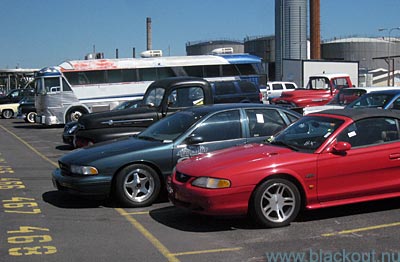 On the special cars import parking lot at Skandiahamnen, Port 2.
Could it be that one? Also take note of the old Greyhound bus
someone has imported! 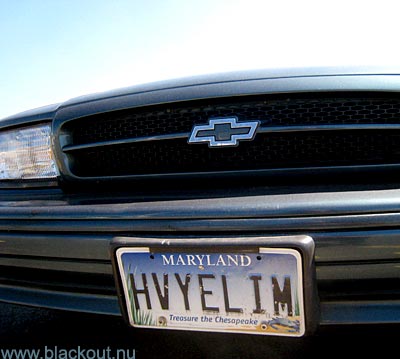 Nah, I'm not sure? This is not how you spell Heavy Eliminator...
But it's Maryland-plates...Treasure the Chesapeake...hm? 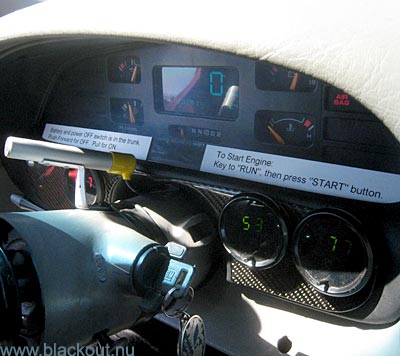 Yes, it might be the one...The One and Only SS of America!
King Karl's Heavy Eliminator!? 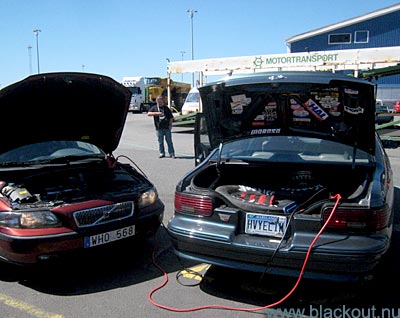 Sören "Fixarn's" Who-Volvo is well equipped since he's always
around imported cars here at the docks that has been forgotten with
the electrics on... A jump into the gates of Sweden!

It was running distinct and I could absolutely feel this is a built
Bracket-killer! Nice logo also... 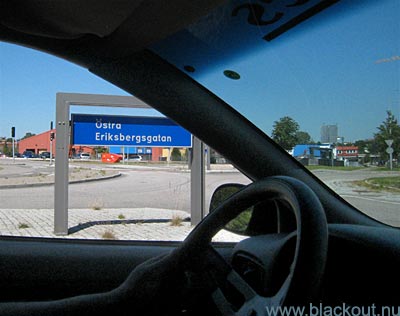 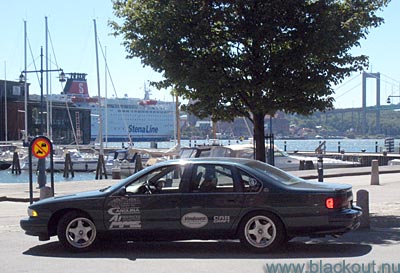 Just a shot of proof. An American in Gothenburg, Sweden! 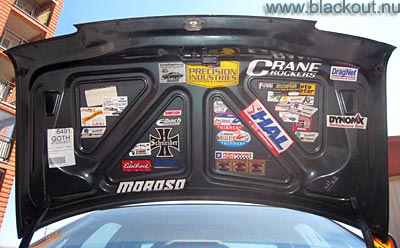 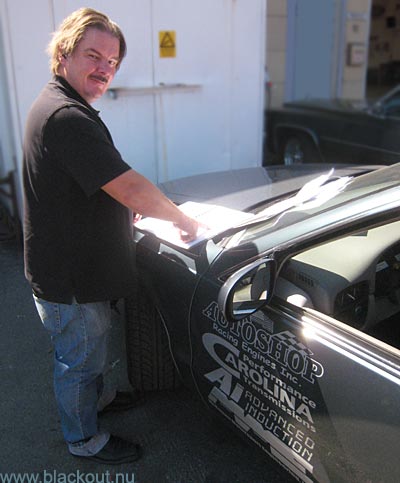 The Man! He can manage everything! "Nothing's impossible, it just
takes more time" is his motto. Sören "Fixarn" Fjellstedt works with
imports and valuations everyday and works together with all kinds
of offices and handles all kinds of bureaucratic material. I know he's
on top of every issue. As mentioned before, this hadn't worked at
all without him. A good investment! Thanks Sören! 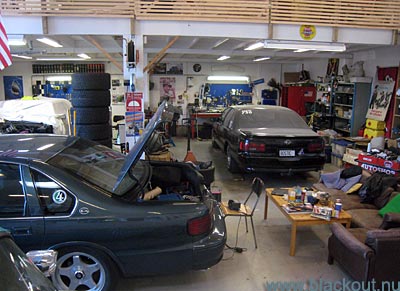 An overnight charging of the battery will do good. "Welcome to our
TBDGIT and Good Night Heavy Eliminator, see you tomorrow!" said
The Lincoln, the Blackout SS and the Biscayne...

Calender will be more specified over time: